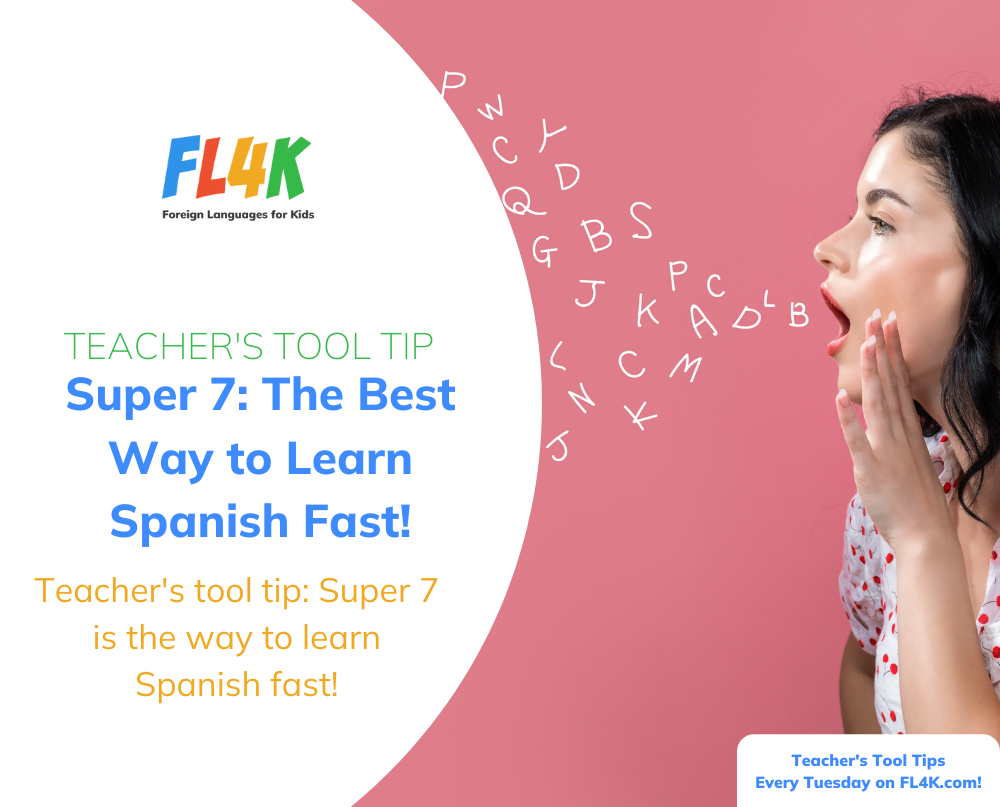 Through my extensive 43-year career as a Spanish teacher I have been asked countless times the best way to learn Spanish fast.

Quite honestly, it’s all about the Super 7! If you have never heard of them, they are the secret! Mastering the Super 7 verbs facilitates the most basic conversations in Spanish. The problem is that many textbooks and programs don’t start with the Super 7 that allow a beginning student to learn Spanish fast.

So many programs start with ser and estar, two verbs that both mean “to be” in Spanish. Textbooks and many Spanish programs go into long explanations of how to differentiate between them. In my experience, even advanced Spanish students struggle with this very foreign concept after four or five years of study! What’s worse, is knowing the detailed rules of these two verbs doesn’t help students learn to speak Spanish fast.

In fact, starting off with rules to master is off-putting and discouraging! Why not give students some tools to communicate?

Presenting the Super 7: the best way to learn Spanish fast!

Tener/to have; Querer/to want; Hay/there is or there are; Gustar/ to like; Ir/to go and then, of course, the all too confusing and challenging two verbs that mean to be; Ser and Estar. (I did not say that they weren’t useful verbs! It is just that learning long lists of rules on how to distinguish them is not the best way to understand and learn Spanish fast.) My colleague and friend, Elena Giudice, likes to include an 8th verb, Poder/to be able, and tweak the Super 7 to the Super 8.

So there you have it. Get busy and master these verbs, not only in meaning but in their conjugated forms as well.

Imagine being able to say “Do you have….?” Well, that is ¿Tienes? If you just learn some basic things you might need in a hotel like soap, towels, shampoo, you can quickly find out what is available to you. I hope that speaking Spanish fast just became imaginable.

Now, add querer/to want and imagine what you can say, ¿Quieres…..? Here you can add items like ¿Quieres agua/cafe?/Do you want water/coffee? or add any other verb infinitive to it and you have ¿Quieres ir?/Do you want to go? Quieres dormir? Do you want to sleep, etc.

Of course, it is handy if you can answer these questions in the first person. Si, quiero ir/ Yes, I want to go, or Si tengo agua/Yes, I have water.

Most people learn to use the verb estar right away in the beginning level of learning Spanish, ¿Dónde está el baño? and ser, Él es mi amigo. Both verbs mean “is”  in these sentences, but one is identifying and the other is locating. Most grammar books make a mess of these two, giving you a long list of when to use ser and estar and dissecting the verbs to the point where you are never really quite sure when to use them.

Well, if you want to learn to speak Spanish fast, learn this rule, the verb estar is basically only used to tell where something is located, El baño está allí and a change or temporary condition, physically or mentally for people, ¿Cómo estás? Estoy bien or the “state” of physically inanimate things like ¿Está cerrada la puerta? Is the door closed? Use ser for everything else!

Are you learning to speak Spanish fast?

Of course, you have to learn how to pronounce the words, and with Spanish, you may already know that a high percentage of sounds and letters match.

The easiest part of Spanish is the vowel system. Each vowel only has ONE sound, a=ah, e=eh; i=ee; o=oh; u=oo. So much easier than English where every vowel has three or four sounds, right? Have pity on those learning English!

So, what are the other three verbs that will make you learn to speak Spanish fast?

Ir=to go. If you combine querer and ir,  you can ask some, ¿Quieres IR a…… un restaurante, museo, gimnasio, al teatro, al cine,  a un concierto, etc? The verb ir is tricky because it is irregular, so you have to learn these conjugations voy/I go; vas/ you go; va/ he/she goes, vamos/we go and van/they go.

In Spanish, if you want to ask a question, you simply need to choose the proper form of the verb and add the appropriate intonation. The form of querer to use with someone you know well is quieres. In English you need 8 words to ask, “Do you want to go to the movies?” In Spanish it is exactly half the number of words, ¿Quieres ir al cine? See how fast you can learn to speak Spanish!

The last verb of the Super 7 is gustar. Who doesn’t need or want to talk about what they like? This verb doesn’t work quite like the other verbs because it uses a different set of pronouns.

Many books go into long grammar explanations about this quirky verb, but the truth is, you just need to know that if you are the one expressing that you like something, it is ME gusta/n, but if you want to find out about another’s preferences, you ask ¿TE gusta/n?

Now why the two forms of gustar?  If the thing being liked is plural I like guitars/ Me gustaN las guitarras and if what you like is singular, I like your hat/Me gustA tu sombrero.

Now, if you really want to learn Spanish fast, add in Super verb #8: poder. You can ask permission with this verb because it means “to be able.” Can I go?/ ¿Puedo ir? Can I have two coffees, please?/ ¿Puedo tener dos cafés, por favor?

Add cognates to the secret formula to learning Spanish fast

The other factor that makes Spanish easy to learn fast is that there are so many cognates, words that look very similar in Spanish and English.

Here are a few: elefante, océano, montañas, frío, garaje, mamá, papa, tomate, ensalada, yogur. Can you guess what they mean? Some words are exactly the same because English borrowed them from Spanish: chocolate, patio, cafeteria, coyote, etc. Just be careful to pronounce them correctly depending on whether you are speaking Spanish or English. Something that seems so similar can easily be misunderstood if you don’t get the pronunciation correct.

My husband tried to order a “yogur/yogurt” in Spanish and thought he remembered the word. He put the emphasis on the beginning of the word YO grrrr instead of saying Yo GURE and the waiter had no idea what he wanted. While my husband was frustrated because the words are spelled almost exactly the same, I can totally understand that the sounds gave very little clue to someone who doesn’t know English.

Learn to speak Spanish fast? Is there an easy way?

Not really, but some methods can really facilitate the process. Teachers that understand how to build oral proficiency concentrate on the super 7 verbs and build in a lot of repetition in their programs. They don’t bog their students down with lengthy grammar lessons that are lost on the beginning language learner and only serve to frustrate and discourage.

Be wary of programs that spend copious pages explaining grammar. Look for programs that get down to business with the super 7 or 8 right away!

Also, look for programs that emphasize building oral proficiency from novice to intermediate and advanced levels. These teachers, texts, programs understand the steps involved in language acquisition. You need a program that provides practice in speaking, listening, reading, and writing, too.

There are many programs out there that profess to help you learn Spanish fast, but the truth is that most of them don’t seem to have a clue about the super 7!

If you are looking for a way for your children to learn Spanish fast, I would recommend going to FL4K.com to checkout a state of the art language program that interweaves interculturality and oral proficiency in a single platform with interactive innovative digital games and activities that serve to engage the Gen Z and help them to learn Spanish fast.

In my retirement, I have been privileged to join a talented team of language teaching experts to use my expertise in the scaffolding of a program for building oral proficiency. I really love what we are doing to help young language learners because the design is unique and engaging with lots of features to help kids actually learn to speak Spanish!!

How to Improve Group Participation in the Classroom

Reading Time: 4 minutes In the last three weeks I have explored the first three stages of group participation and development: forming, storming, and norming, all essential developmental phases in preparation for the final phase, performing! Most of us have been doing this throughout our teaching careers in the form of group projects or presentations at the end of […]

4 Activities for Students in the Storming Phase of Group Development

Reading Time: 3 minutes Last week I mentioned some activities that can be used in the World Language classroom during the “forming” phase of group development. This week, I will address the next phase, “storming,” the time when students may begin to share differing opinions and even compete with each other in the classroom. Teachers can provide time and […]

5 Activities for Group Development in the World Language Classroom